On the tracks of a 1000 year-old history

The Camino Francés, or French Way, is the traditional route to Santiago de Compostela. Most pilgrims start their journey in St. Jean Pied de Port on the french side of the Pyrenees and walk the 800 kilometres to Santiago. The great infrastructure, the rich cultural heritage and the many fellow pilgrims make this Camino such a unique experience.

On this special Camino, we offer mixed international tour. In the great tradition of the European pilgrimages, we want to connect people from different countries. Our multilingual tour guides will give participants all relevant information in English and German, but speak many other languages as well.


Read about the history of the Camino Francés

In the 11th century, faced with growing numbers of pilgrims, king Sancho III of Navarra established a way over the Pyrenees to Nájera. The royal cities of Jana, Pamplona, Burgos and León were all connected by the Camino Frances and the thousands of pilgrims enriched the region both economically and culturally.

In 1993 the UNESCO included the French Way in their world heritage list, for its historic and cultural significance.
The medieval pilgrims left a strong imprint of the regions of Northern Spain and many traces of this time can still be found when walking the French Way. When foreign traders, craftsmen and artists settled along the Camino Frances, many Spaniards simply called them “Franks”, even though not all of them were. This is how the Camino Frances got its name.

It is true though, that especially the superior Frankish craftsmanship and architectural knowledge shaped many cities along the Camino. The movement of pilgrims was also a strong economic stimulus and many hospitals were founded along the way to treat pilgrims that had gotten ill. Cities like Logroño, Burgos and Santo Domingo de la Calzada owe their size and prestige partly to their location along the Camino Frances. Over time, many cities along the way acquired Christian relicts and built churches, while also more and more miracles were reported to have been witnessed in various locations.

As the French Way became the main route for pilgrims in medieval times, it still boasts many historical and cultural treats. Cities of medieval charm, stories of miracles, vibrant cities like León and great landscapes make it an absolute highlight. The great infrastructure and comradery among pilgrims make the Camino Frances so special and appealing. We begin this journey in St. Jean Pied de Port and cross the impressive Pyrenees. Passing by lovely Pamplona, the city where bulls run through the city once a year, we enter Navarra. End of this trip is the charming town of Nájera. You can end this trip here or continue with our group tours. Read more... 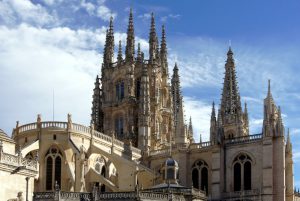 From Nájera we cross the region La Rioja, tasting its great wines on the way until we reach Burgos. Its famous cathedral is part of the UNESCO World Heritage. We then enter the high plane "La Meseta", with its surreal barren landscapes, until we reach Calzadilla de la Cueza. Read more... 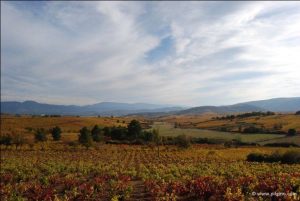 Starting in Calzadilla de la Cueza we walk to the royal city of León where we can visit its opulent cathedral. Passing through Astorga - a Roman city - we get to the Cruz de Ferro to leave a stone at its base. Read more... Cross the mystical mountain pass of Cebreiro, we enter green Galicia, dotted with charming villages. Stopping in fascinating towns like Portomarín, we slowly make our way to the great destination of this journey: Santiago de Compostela. Read more...